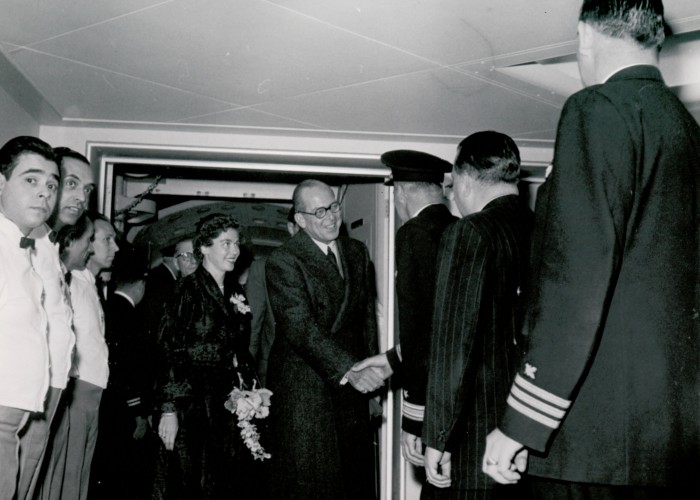 ” I think if people are met by somebody who stretches out their hand to greet them, they are more likely to feel welcomed.”* Passengers boarding the United States received a warm welcome, especially if they were the King and Queen of Greece. (above). * Peter Crome

Step aboard for a first-class sailing experience.

In 1954, the minimum first-class fare on the SS United States from New York to Southampton was $365 ($3,783 in 2022). For that price, passengers sailed on a floating luxury resort offering the refinement, service, and conveniences of the finest American hotels. They enjoyed expansive deck space and elegant public rooms. First-class had the best location, amidship, away from the vibration of churning propellers and the impact of waves slamming into the bow. It was a wonderful way to travel, civilized, luxurious, entertaining, relaxing, and friendly. 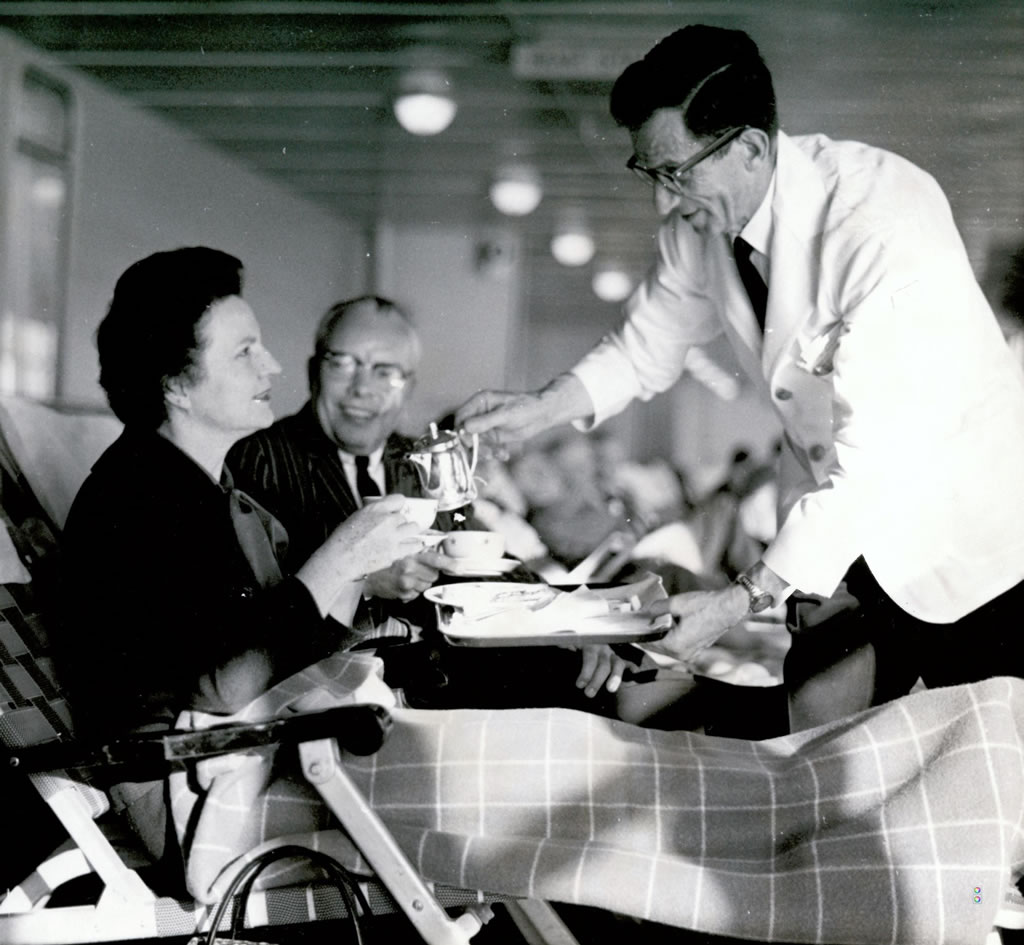 Pursers on the SS United States were versatile, being able to greet royalty and run bingo games with equal ease. Chief purser Clarence “Bob” Gehrig had an incredible memory. A passenger might board the ship after a number of years. He would welcome them by name, recalling some special item that anyone else would have forgotten long ago. The friendly greeting made passengers feel as though they were his personal guests. [1] Pursers were also adept at fixing complaints, accommodating VIP parties, or having trouble in the dog kennels. “If anything goes wrong – it’s our necks,” according to executive purser Henry Moreno.

The SS United States defined America on the high seas in terms of decor, atmosphere, food, and service. Passengers traveled on a happy ship, with an informal seagoing elegance that made them feel at home. “She was not as stuffy as the big British liners,” according to assistant purser David Fitzgerald. “Many passengers took her out of a patriotic spirit. Many felt they would be better understood on an American ship.”[1]

After a long sojourn in Europe passengers walking up the gangplank of the SS United States were back in the USA. The ship offered a slice of American life at sea with first-run undubbed movies, the latest hit tunes, pizza, and milkshakes. The menu contained familiar dishes such as Long Island duckling, New York strip steak, Maine lobster and sugar-cured ham, and apple pie. Where else could you order a Depression-inspired dish of vegetables with a poached egg named ‘vegetables a la Hoover’, or a healthy “Clara Barton Salad.”

Running a 5 Star Hotel At Sea

Chief Steward Herman Mueller had one of the toughest jobs, making certain the SS United States lived up to its designation as a luxury liner. The affable veteran started his seagoing career as a mess boy. Thirty years later he was in charge of a crew that included 760 men and women out of the total crew of 1,050. His share of supervisory responsibilities included all food service, hotel services, and keeping the ship spic and span. He did the latter so well that the ship always smelled and looked as new as the day it left the shipyard for the delivery voyage to New York.

Mueller also set the tone for passenger services, based on courtesy, a desire to be of service, combined with a dignified manner, and pride in a job well done. Good manners were also important and the following lapses were to be avoided; chewing gum, cleaning nails or combing hair, picking of teeth, and arguing with passengers.

For the most part, his staff followed through with personal touches that made the voyage memorable. For example, the bounty of food would occasionally overwhelm immigrant families who had endured the hunger and deprivations of post-war Europe. Not taking any chance of going hungry between meals a young family returned from the dining room with rolls and fruit stuffed in their pockets. The attentive cabin steward made sure that each day they had a fresh basket of fruit and pastries. A four-month-old baby woke up hungry in the middle of the night. Responding to the call for assistance, a nurse in a white uniform showed up at the cabin with a baby bottle, wrapped in a white damask cloth, set in a champagne bucket. These were the touches that made the SS United States so special. 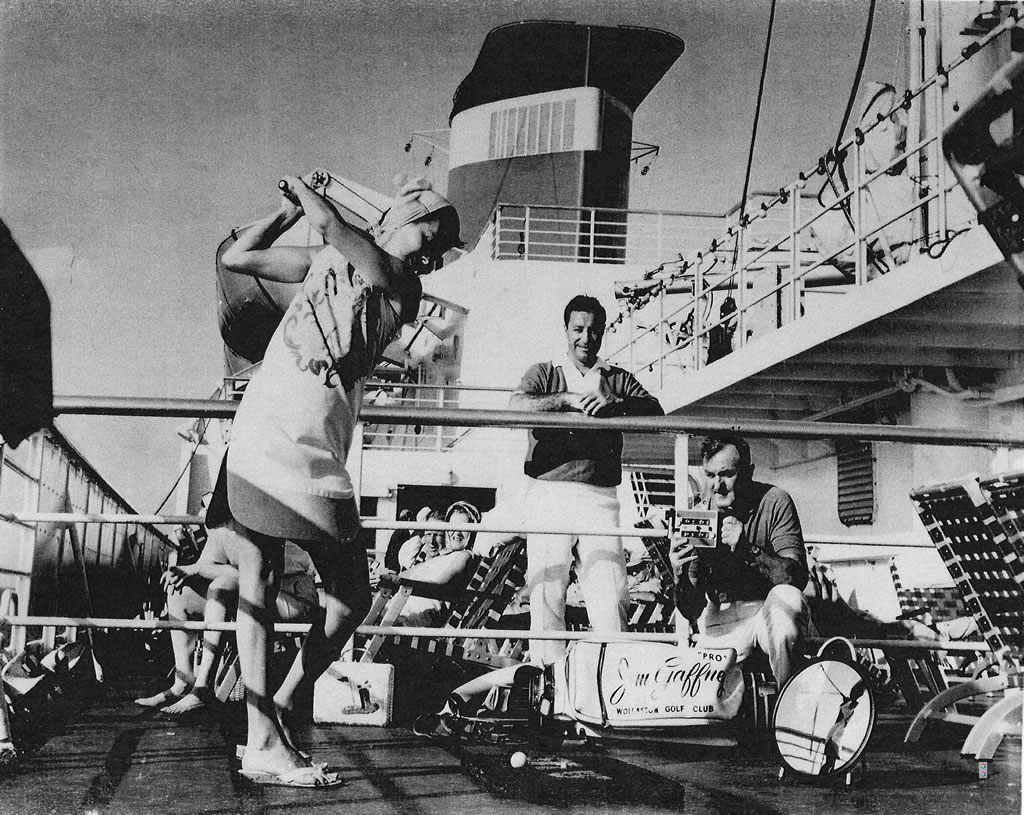 A golf lesson on the SS United States

The following two items give you a glimpse into shipboard life on the United States.

A DAY AT SEA
Excerpts from the SS UNITED STATES ” DAILY PROGRAM” for Voyage 398 Eastbound Friday September 26, 1969. Each of the 3 classes had there own Daily Program

Events of the Day

2:00 PM to 4:00 PM- Trapshooting on the Fantail (Weather Permitting). There will be a nominal charge for this event. Tickets may be obtained at the Purser’s Office.

2:30 PM-Informal cards in the Observation lounge.

3:00 PM- Hostess Tour of the Fine Arts of the SS United States. Please assemble in the Observation Lounge.

4:00 PM-Orchestral Concert in the Ballroom during Tea Service.

930 PM- Snowball Bingo in the Ballroom

CLOCKS WILL BE ADVANCED 75 MINUTES DURING THE NIGH

Events of the Day

1:15 PM- Movie in the Theater ” ONCE UPON A TIME IN THE WEST”   Claudia Cardinale & Henry Fonda running time hours & 45 Minutes.

2:00 to 4:00 PM- Trapshooting on the fantail ( Weather permitting). There will be a nominal charge for this event. Tickets may be obtained at the Purser’s office.

4:00 PM-Afternoon Tea and Concert in the Dinning Room

CLOCKS WILL BE ADVANCED 75 MINUTES DURING THE NIGHT

0830: Automat, 50th 6-7th Ave Breakfast.
0950: To Boat-Pier 86, NR.foot 46th ST. cabin S 47- First class. Sun Deck. Joined on board by others, with our gang. John & Gladys Eaton, Bruce Eaton, Neil V Johns.
1130: All ashore for those not sailing.
1201: Tugs “Carol Moran” and Barbara Moran” pulled ship from dock and into N.R.
Bridge free of Pier 86. Harbor foggy. Opposite Statue of Liberty ran into Edmond Stanley Herbert Staples, owners & operators #9 Knox st Boston. Also aboard, but not seen as yet. Duke and Duchess of Windsor are aboard.
1300: To Asst Chief Steward Mumsey for table setting- late Table 36
1330: Time to eat.
1400: Passed Ambrose Lightship. Spent afternoon getting acquainted with layout of ship.
1600 Life boat drill with jackets, out at sea now. Foggy- the usual 5 sec blast every 2 minutes.
20.30: Supper.
2200: Movies.
2300: in the lounge for a smoke before retiring around midnight. Advanced clocks 75 minutes during nite. Fog lifted during night. 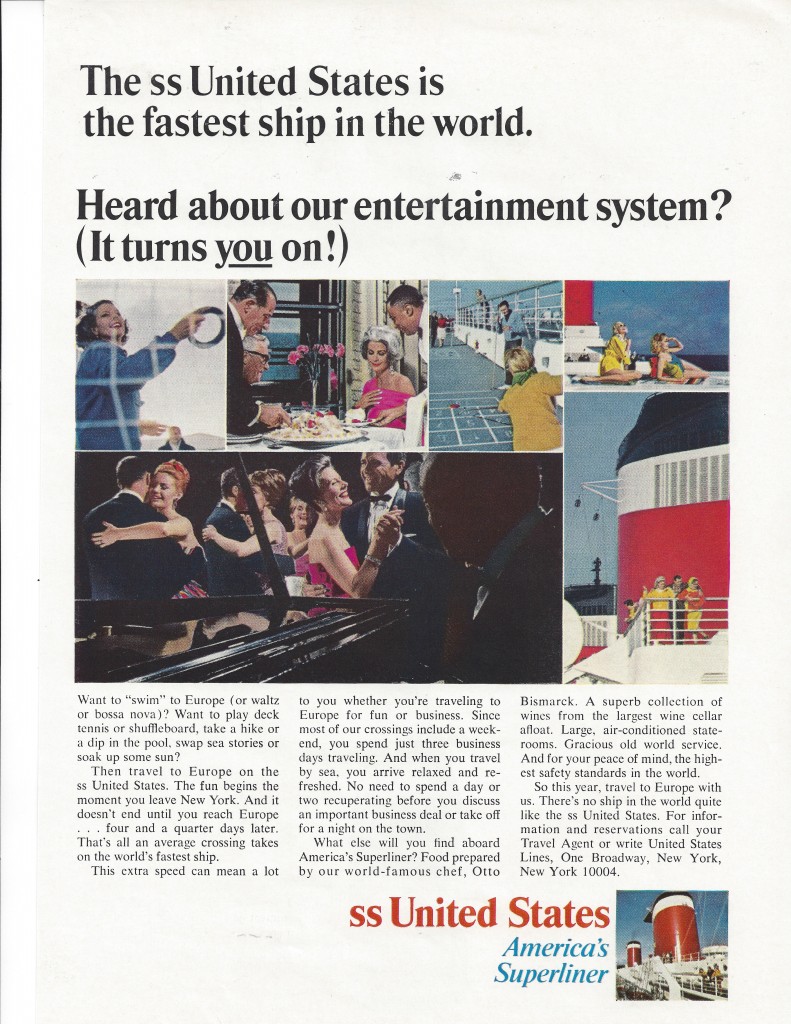