Dining on the SS United States “It was like being in a palace,” recalled the ship’s historian and frequent passenger Frank Braynard. “One magnificent room led to another.” With six meals a day, from breakfast to the late-night buffet, Braynard recalls, “You could kill yourself eating.”

SS United States Head Chef Otto Bismarck liked his food delivered fresh, including the main ingredient for green turtle soup. Just before sailing, a lumbering 240-pound turtle slowly climbed the gangplank on his way to the kitchen and the soup pot. “We prefer to use fresh turtle instead of canned. We like fresh fruits and vegetables better, too.” green turtle soup explained the short, stocky German – American chef. He did make an exception for the Kangaroo Tail soup. The tails came in frozen from New Zealand. Among his other purchases were 11,000 pounds of prime ribs of beef and steaks 580 gallons of cream, 480 gallons of heavy ice cream, 216 pounds of caviar, 11,000 pounds of poultry, 2,500 pounds of carrots, and 2,300 heads of cabbage.

At times temperamental and politically incorrect he headed up a staff of 176 men and no women. “Oh, we do have about 100 women on the United States, stewardesses, librarians, and such,” claimed the chef in his accented German. “But we do not want them in the kitchen. They talk too much.”

On SS United States galley tours, Bismarck enjoyed showing off his new high-tech microwave ovens, known then as ‘radar ranges’. He was never quite sure of the technology. “I think it has something to do with radar,”  as he demonstrated how quickly it cooked a steak. “I am not sure how it works. It sort of electrocutes the food.

Bismarck and his staff turned out approximately 9,000 meals a day. To meet the demands of his international passengers he created an international menu. A typical diner menu would include stuffed turkey with giblet gravy and cranberry jelly, shish kebab, poularde de Bresse, or from the cold buffet, a selection of Swedish smorgasbord delicacies. 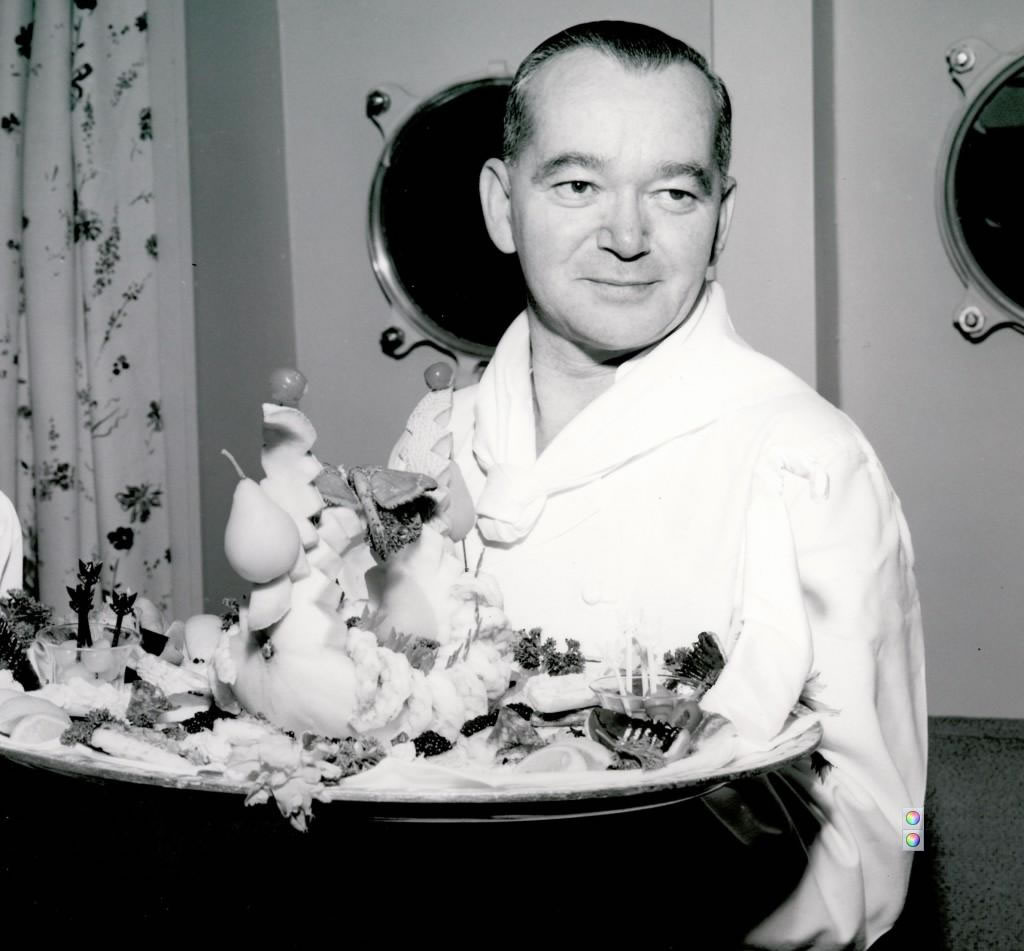 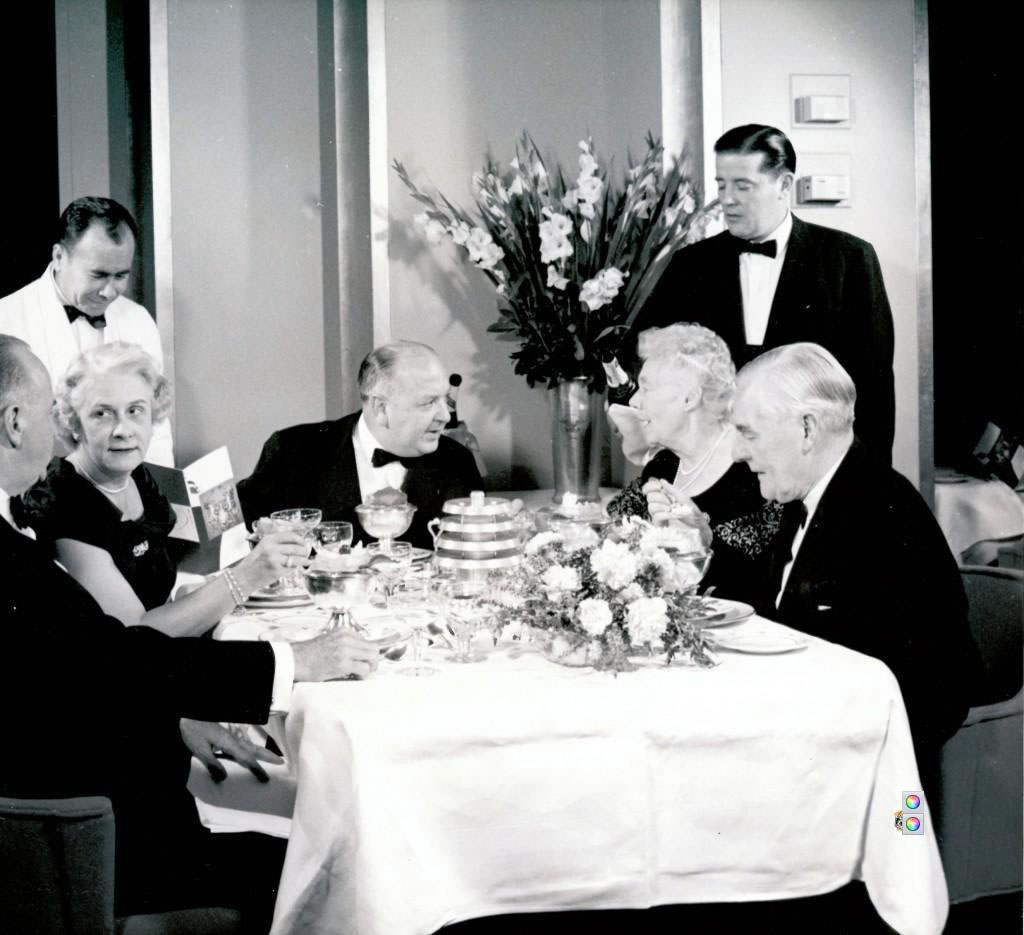 To the man in charge of the SS United States first-class dining room, the competition for passengers was won or lost at the dining table. “Given that superliners are all pretty luxurious and they take about the same amount of time to cross.” According to Arch Mundy Maître D on the United States, “The only competition between passenger ships is based on service and food.”

A native of Southampton, England, he grew up during the Depression and chose a career in the food business. As he put it, “We took a lot of interest in food those days – there was so little of it.” He went to sea at the age of thirteen because “It’s the only place where they serve three hot meals a day.”[1] Mundy settled in the United States in 1932, took a job with United States Lines, and worked his way up the culinary hierarchy.

A longtime observer of the eating habits of passengers, he noted the difference in food preferences between eastbound and westbound passengers. Outbound on the SS United States for Europe they preferred rich, fancy dishes and heavy sauces. On the trip home, they stuck to a simple fare – roast beef, grilled chicken, potatoes, and vegetables.

Ordering off the menu was encouraged by the staff with some passengers indulging in lavish dishes knowing that for once there will be no check. One foodie always carried his own wheat-germ and special molasses. A hunter hauled his own venison aboard and watched over its preparation, which included soaking it in milk.

Oceanliner critic Denny B. Beattie, reviewing the ship in the magazine Sea Lines, described the cuisine aboard the SS United States, “Excellent; by far superior to that served aboard the Queen Elizabeth. The entrees were varied and numerous and the steak was the best I have ever had. You just rested your fork on it and let gravity do the rest – it was that tender.

” A passenger asked the waiter to wrap up her leftover steak for the dog. The waiter took the food away, but reappeared several minutes later carrying a fresh steak on a silver platter – for the hungry dog. “

–From The Last Great Race

Each waiter took care of eight passengers, offering superb personal service. They were considerate, with a distinctly American style, friendly and prompt without overdoing it. Despite the best efforts of management to address passengers as “Sir” and “Madam,” some waiters insisted on using “Mac” and “Ma’am”. [Insert picture 5.10 waiter and family]They became familiar with passengers’ likes and dislikes and were quick to suggest a different dish with “I wouldn’t try that, Mac.” If they liked you, extra desserts would appear. A passenger remarked to the waiter that the cream of chicken soup was good enough for dessert. A surprise awaited her at the end of her meal, “He smilingly served me a second cup of soup with my dessert!” A passenger asked the waiter to wrap up her leftover steak for the dog that had been seasick. The waiter took the food away but reappeared several minutes later carrying a fresh steak on a silver platter – for the hungry dog.

In violent storms, the waiter would approach the table with a half pitcher of water and with a napkin precisely folded over his bent arm. He ceremoniously poured the water all over the table, a move that astounded adults and delighted children. Dishes on the wet table were less likely to slide. If the ship took a sudden forceful pitch or roll, a raised ring around the circumference of the table was the last stop before crashing to the floor. Web safety belts were pulled out from under the tables and circled around chairs holding the passengers to the tables, which were riveted to the floor. The precaution was no guarantee of stability with US Lines informing passengers, “If your chair should move in the dining room while at meals, hold on to the table – do not attempt to save table utensils or equipment.”[1] 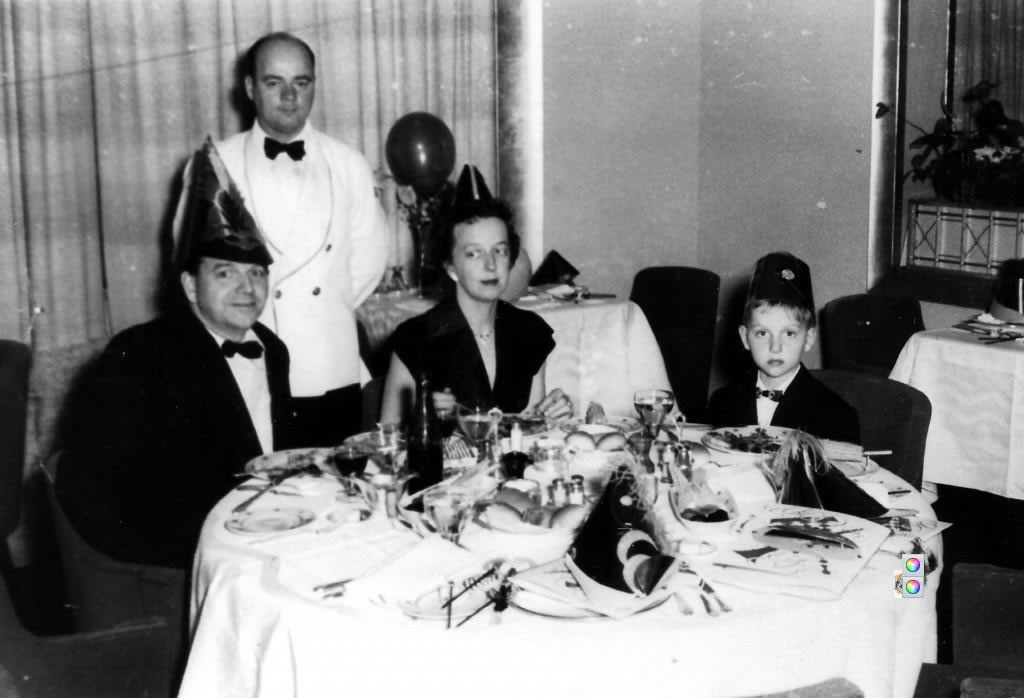 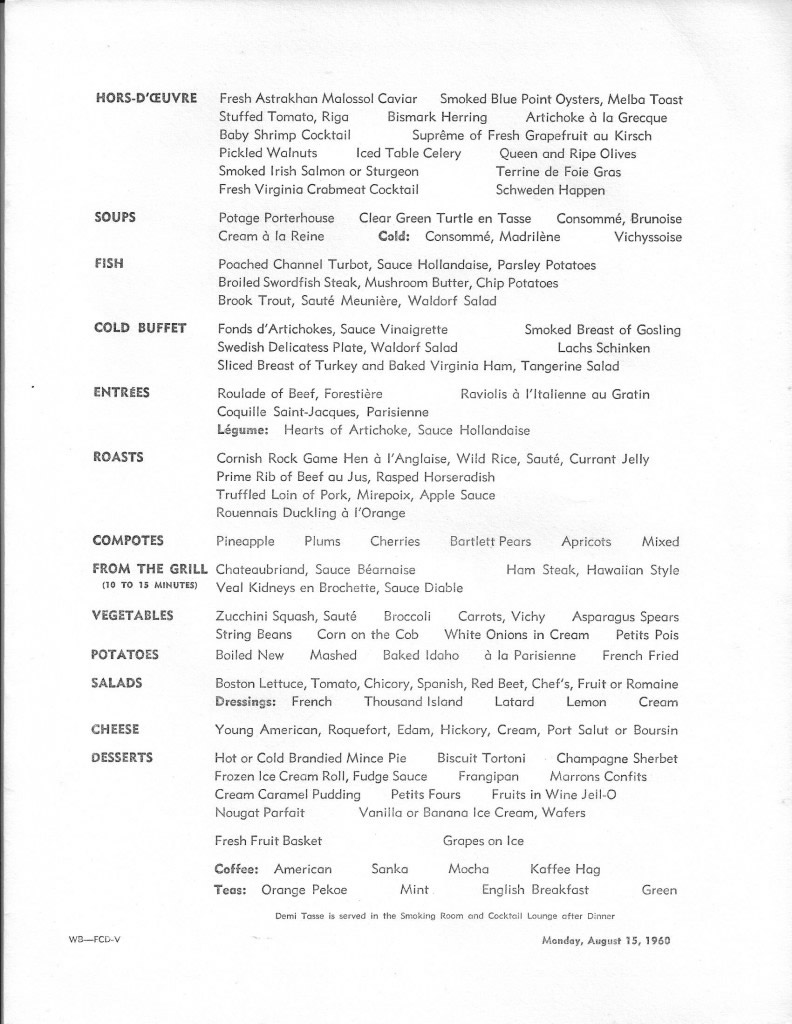