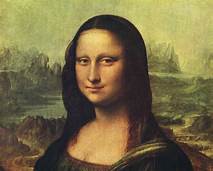 In the spring of 1962, First Lady Jacqueline Kennedy worked her charm on André Malraux, the French minister for cultural affairs. Her request, would the French be willing to send over the Mona Lisa for a US Tour. Despite fierce French resistance, the minister accepted her request to send over Leonardo da Vinci’s stoic portrait.

It was agreed that Mona Lisa would travel by sea and what better way to demonstrate the joint Franco-American undertaking than to have her sail on each nation’s passenger flagships. The voyage to New York would be on the SS France and the return on the SS United States

Transporting a 450-year-old picture painted on wood three thousand miles across the Atlantic Ocean in the depth of winter is a risky undertaking. Staff at the Louvre went overboard to protect the famed painting. In December 1962 the painting was loaded onto the ocean liner S.S. France. and bolted to the floor in first class Cabin M-79 to prevent crashing about in rough weather. Covered with a thick, dark-gray wool blanket, the fragile painting remained sealed in a temperature-controlled, bulletproof floating box painted with a French flag in the event that the ship caught fire or sank Mona Lisa had to be thrown overboard.

Five days later the French Liner docked at pier 88 in New York. As Modest Mussorgsky’s Pictures at an Exhibition. played over the ship’s PA System, five crew members transported the metal case containing Mona Lisa from her first-class suite to the Grand Salon for a 45-minute photo op.

Under the watchful eye of Secret service agents, French Line deckhands transferred the painting to a waiting van for the police escorted ride to the National Art Museum in Washington DC 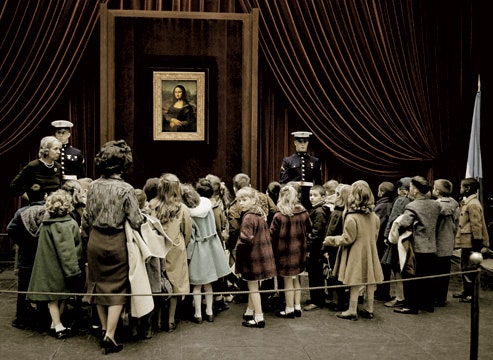 After an eleven weeks tour, Mona Lisa boarded the S.S. United States for the return voyage to France. Guarded day and night, she traveled in a three-room first-class suite listed under the “L” section of the passenger list as Mona Lisa. Each day, outside the cabin door, the escorting security men placed size 15 shoes for polishing. The idea was to make fellow passengers think that a very large man was guarding the painting.

On March 7, the painting was safely back in the Louvre, where it has remained ever since.

The world’s most valuable work of art was made as a personal loan to President Kennedy, thus it was with a measure of relief when transfer back to French custody took place.

“Received in cabins M72, M74, and M75, on board the SS United States, at Pier, 86, North River, West 46th Street, New York City, the painting Mona Lisa by Leonardo da Vinci, its frame, and containers for both, all in the same condition as delivered to the National Gallery of Art on December 19, 1962. All responsibility of all officials of the Government of the United States, the National Gallery of Art, and the Metropolitan Museum of Art for the painting, frame, and containers is hereby terminated.