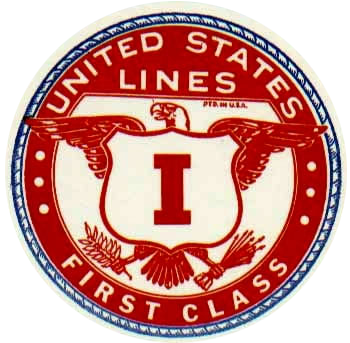 When the America began her Atlantic crossings in 1946 some travel agents questioned the ship’s ability to attract affluent passengers. Cunard lines offered bigger and faster ships in the Queen Mary and Elizabeth. Their service was impeccable. America met the competition and over the years attracted a loyal following. This was accomplished by offering luxurious First Class facilities with service that was superlative yet genuine and friendly. In addition, she offered something no other ship had, a piece of America at sea, a more democratic spirit; a fresh new world appeal. As this country’s ship of state, she was a showcase for the best in American engineering, art, craftsmanship, interior design, and cuisine. The ship was an all-American product. From the Oregon pine decking to the Rhode Island silverware on the tables, practically every State in the Union contributed material and equipment. The interiors were fashioned by American designers, architects, and decorators. The food featured the best regional cuisine. It all came together to create a truly First Class experience that would attract tourists, diplomats, royalty, and Hollywood stars. First Class fare to Southampton in 1951 was $295.00 and up in First Class, $200.00 in Cabin, and $160 in Tourist. For that price passengers sailed on a floating luxury resort offering the refinement and conveniences of the finest American hotel. They enjoyed expansive deck space and elegant public rooms. First Class had the best location, amidship, away from the vibration of churning propellers and the impact of waves slamming into the bow. It was a wonderful way to travel, civilized, luxurious, entertaining, relaxing, and friendly without being stuffy. The America set the standard for American First Class travel at sea. 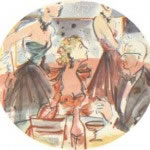 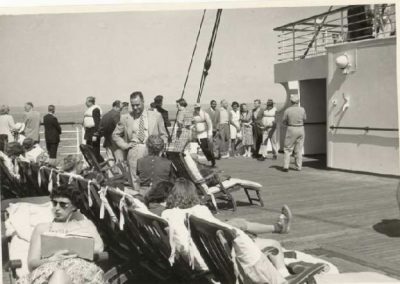 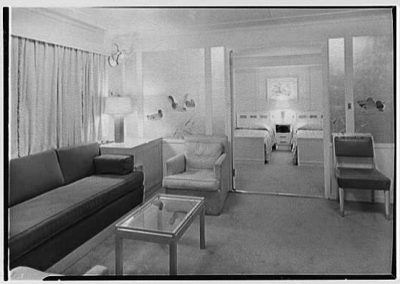 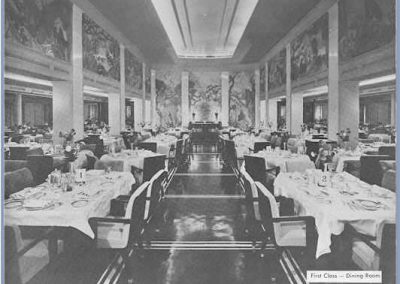 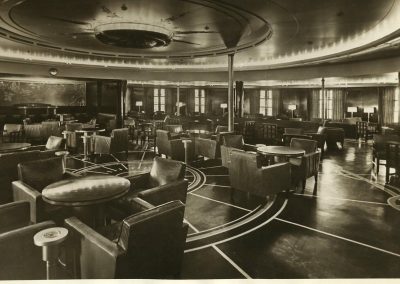 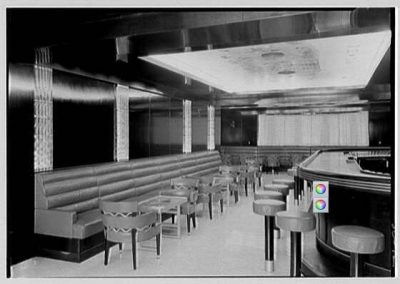 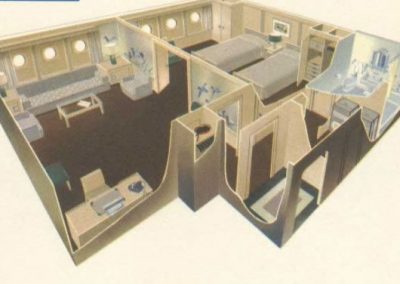 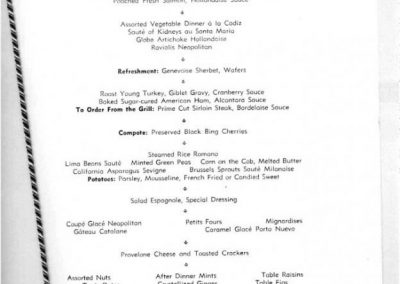 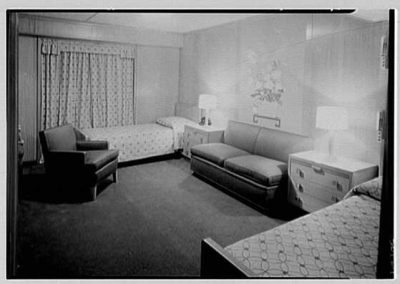 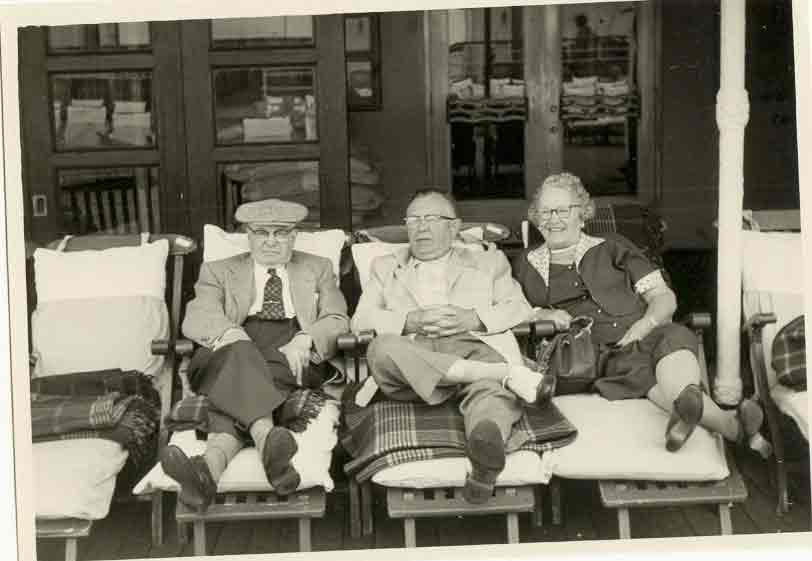 Picture from the Brian Petersen collection

Cabin class was referred to as the ” Middle Class” of the ship. Referred to in travel brochures as “Happy Medium” in Atlantic travel, offering high standards of comfort and service at reasonable rates. Typical travelers included vacationing clerics, professors, seniors, and families. With more space, comfort, and amenities passengers lived between the luxury of First and spare accommodations of Tourist. It was just the right mix for those who wanted more room and were put off by the extra appointments and perceived formality of First. Dressing up for dinner was optional, and a more informal atmosphere prevailed in the public rooms.

All but four staterooms in Cabin Class had a private shower and toilet. The curly maple paneled dinning room was bright and cheerful . Passengers dined beneath Hildreth Meire’s stylized murals of the skylines of San Francisco, New York, Paris and London. The smoking room came with fireplace and chairs upholstered in leather and hand woven fabric. There was room for deck games on a large expanse of Upper Deck and a glass enclosed promenade on Main deck. 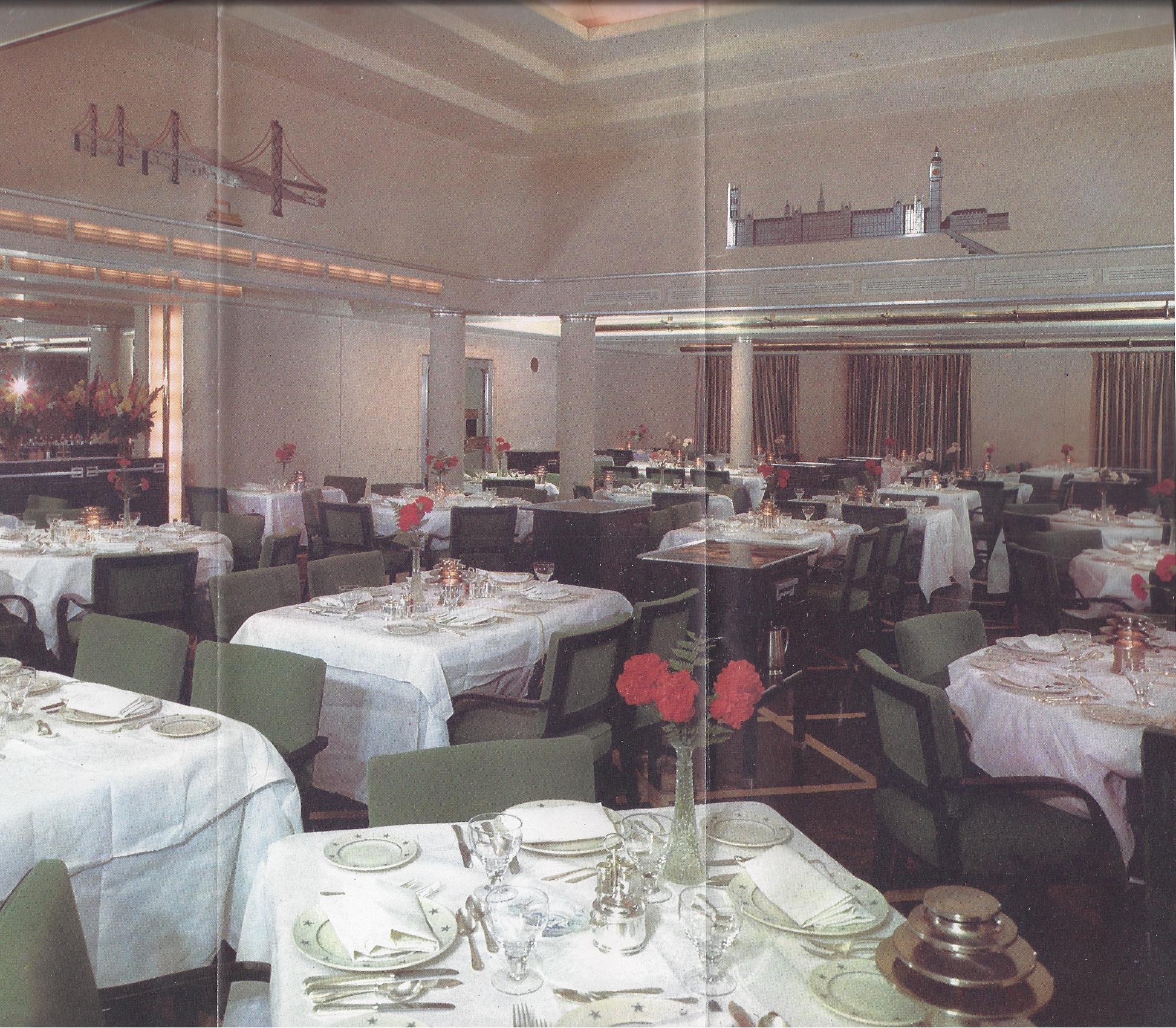 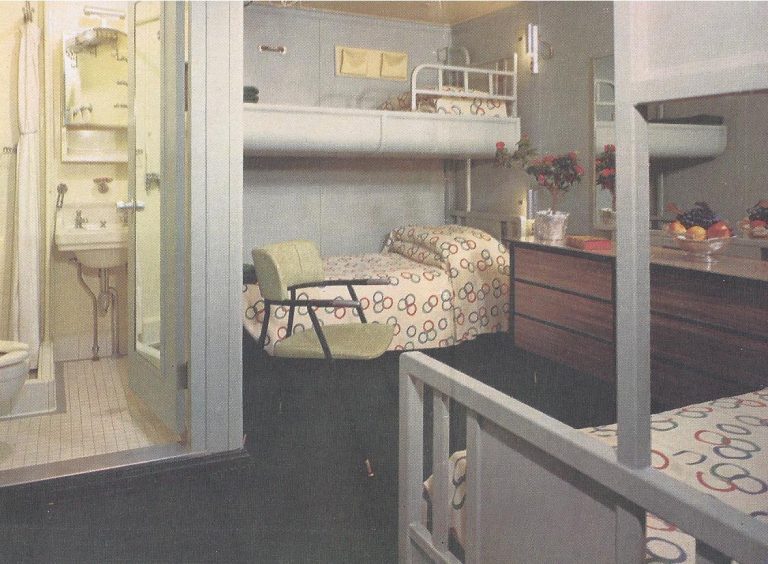 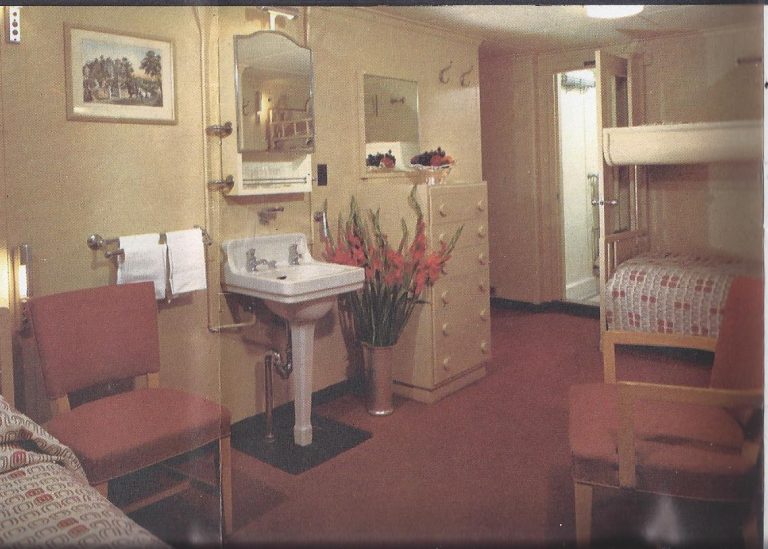 ” To those who like dignity rather than pretentiousness comfort rather than display, all of this will seem no drawback. Having traveled on the French and English superliners, I can testify that the slower smaller American competitor is easily the most attractive both in decorations and that indefinable element of personality that every ship possesses.” 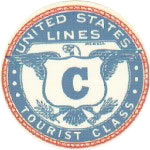 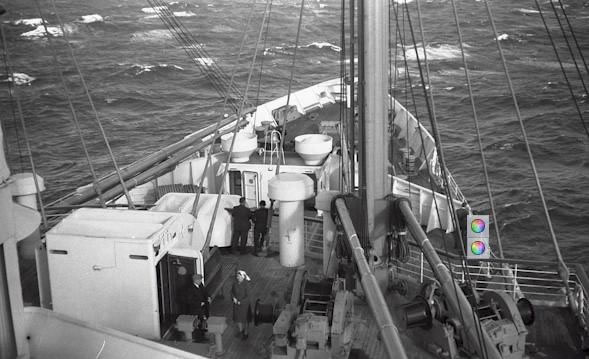 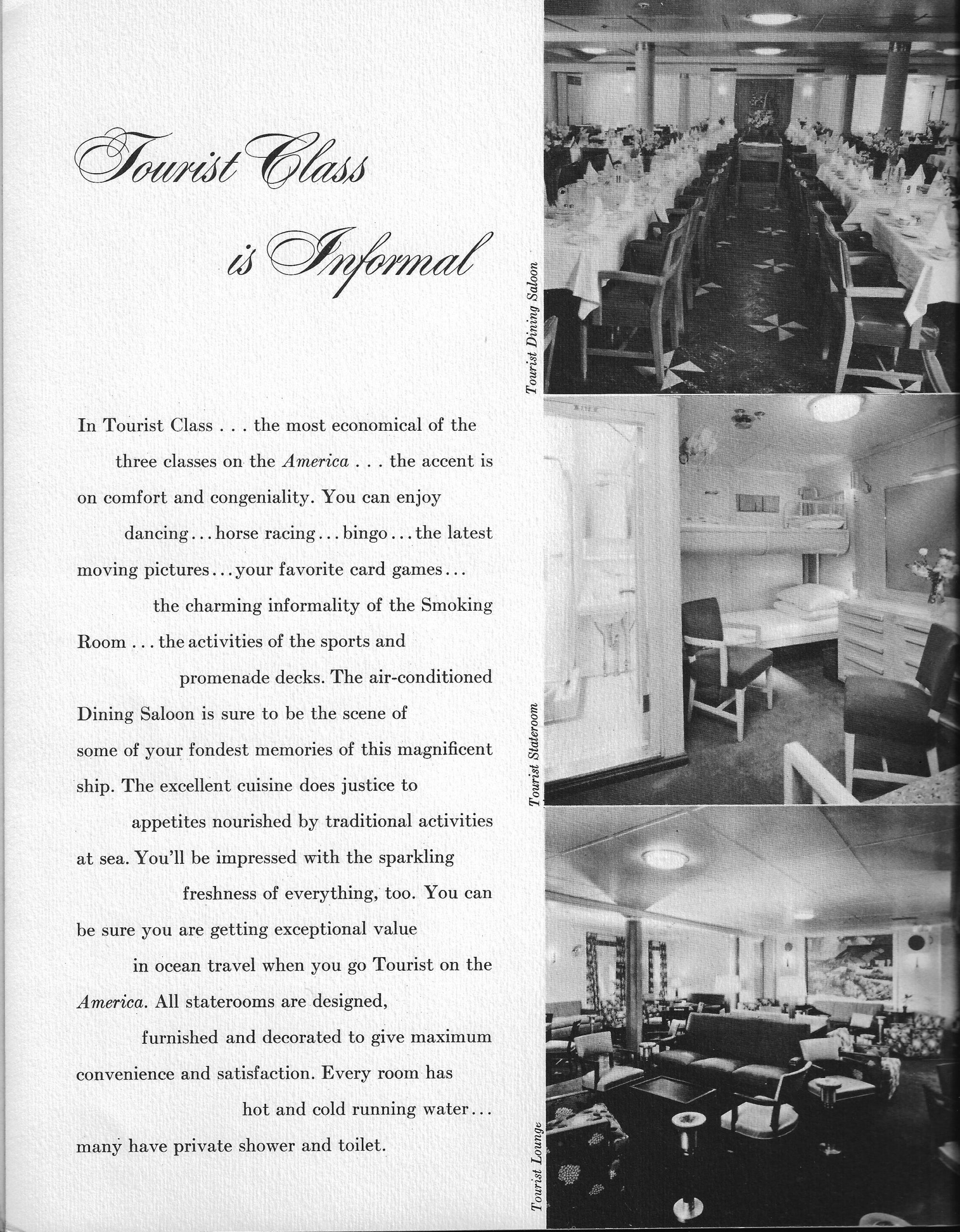 United States lines described Tourist class as a “Convenience to those who are economy-minded and desire to obtain the best possible value in ocean travel for a limited expenditure”. Value travelers frequently included students and immigrants on a limited budget and families returning to visit the homeland. The staterooms were pleasingly decorated and comfortably furnished. About half of them had private showers and toilets. The public rooms were described as “homey”, smaller and less grandiose than those in Cabin and First Class they were comfortable with a warm friendly atmosphere. The same care and talent went into decorating all public rooms in the ship. They were so well done that it was difficult first glance detect a difference in class. Assistant Purser Morris Luft described the tourist Class smoking room as ” One of the nicest rooms on the ship”. 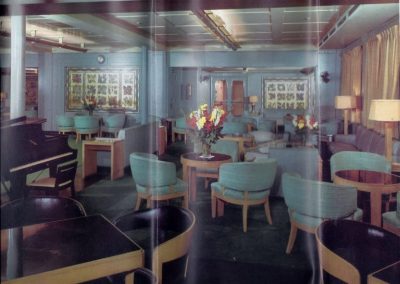 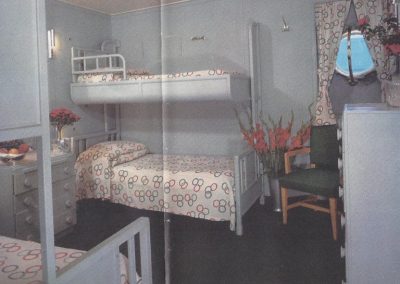 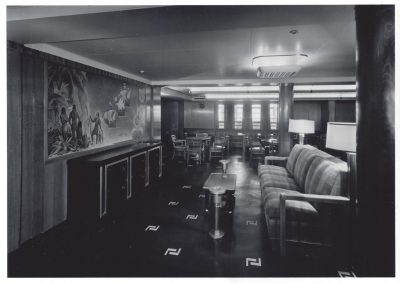 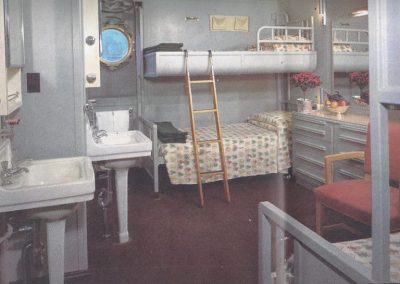 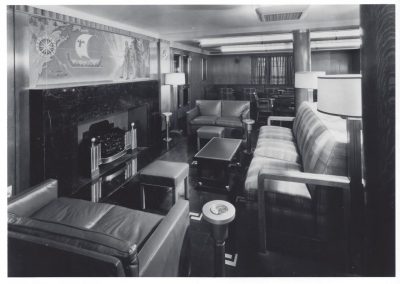 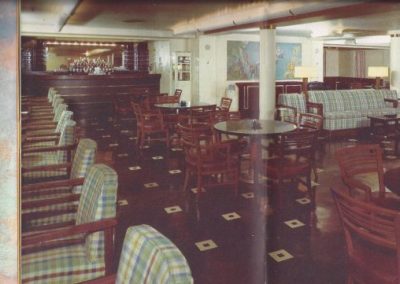 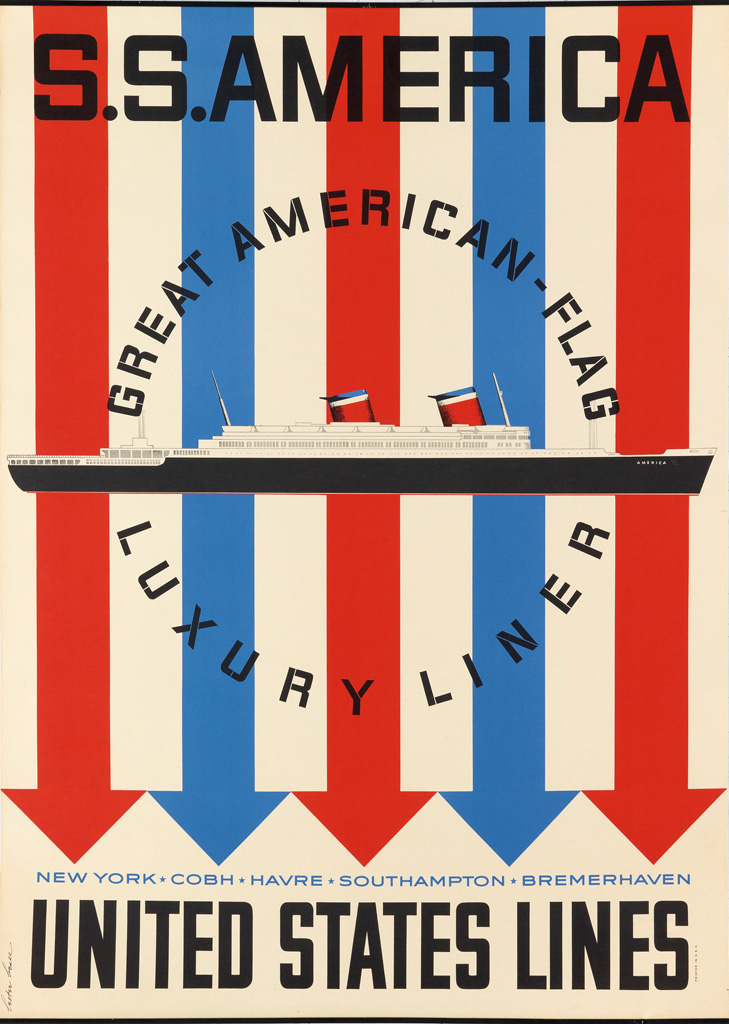