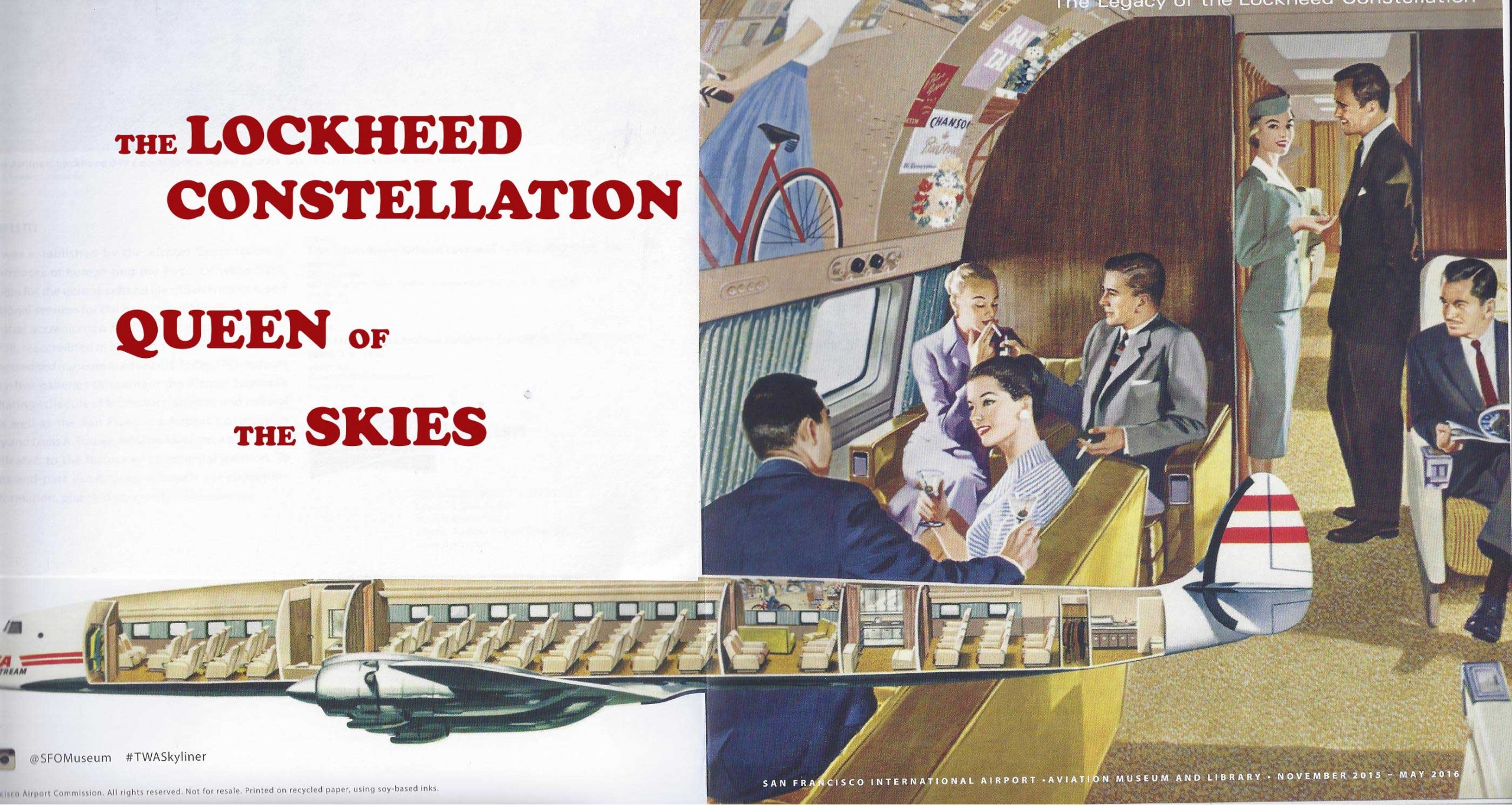 The Constellation has been referred to as the epitome of piston liners. A fast high flying beauty distinguished from ordinary aircraft by its height, length, and sensuously curved fuselage. When first introduced to the public in 1944 the airliner electrified the flying industry with its good looks, long-range, speed, and comfort. Its creators were themselves high flying colorful characters. TWA president Jack Frye, an aviation pioneer who set transcontinental speed records and maverick movie producer- multimillionaire and aviation enthusiast Howard Hughes (the Aviator).

In a career that ranged from stunt pilot to airline president, Jack Frye built TWA into one of the nation’s major airlines that is until the depression of 1930 when the bottom fell out of the airline business. In the cutthroat competition that followed, TWA lost ground to competitors American and United airlines with their better route systems. What he needed was a DC 3 beater AKA the Douglas DC 3, the flying standard of the day.

A pressurized cabin was the key to flying comfort, without it, planes were limited to a ceiling of 12,500 feet where the weather was more active. Frye knew all about pressurization. Equipped With a bottle of Oxygen and his Texas bravado he explored the stratosphere in search of better flying conditions (see sidebar). He found them, along with the jet stream above 25,000 feet where the ride was smooth and fast. The new airliner, with a pressurized cabin, would fly at 20,000 plus feet ‘above the weather leaving the competition’s un-pressurized DC 3’s, bouncing around in the low hanging clouds of the ‘air sick zone’.

Jack Frye ‘The Flying President’ could outfly most of TWA’s skilled crews.

All he needed was money and a leap of faith on the part of the TWA Board of Directors. He received neither and with his turn around plan rejected the beleaguered airline president turned to an unusual source to fund TWA’s new airplane. 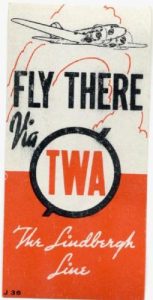 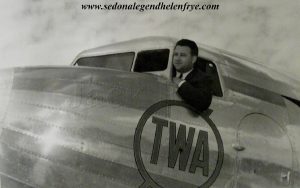 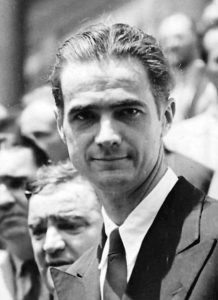 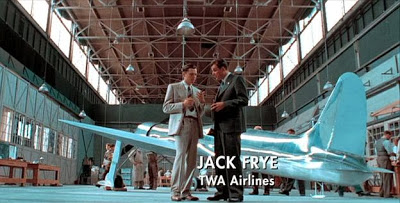 From the ‘Aviator’ Jack Frye discusses the Constellation project with Howard Hughes (left) Miramax Films
With a new owner on board, the TWA technical team started developing the plane’s specifications. Working with Hughes took some adjustment – he did not fit the typical owner’s mold. When Frye’s assistant in technical affairs, Tommy Tomlinson first met the new owner he couldn’t believe his eyes. Hughes looked like a tramp with long hair and dirty fingernails. “Do I really have to put up with this guy?’ Tomlinson asked Frye. “Tommy, he owns the airline” replied Frye. [1]

Hughes had no formal training in aeronautical engineering. Yet he was a brilliant inquirer with an inquisitive mind that turned out fresh and often inspired ideas. Hughes and Frye made an unlikely team. Both loved to fly and were accomplished pilots although their flight deck manners were distinctively different. Hughes flew barefoot “to get a better feel of the plane’; Frye flew chomping on one of his trademark cigars. What they had in common were creative minds uncluttered by fear and conventional wisdom.

Creating The Star of The Skies

The TWA job had a potential order of 40 planes and was Lockheed’s ticket into the major leagues of aircraft builders. “Up to that time we were sort of ‘small-time guys,’ said Hibbard, but when we got to the Constellation we had to be ‘big-time guys. We had to be right and we had to be good.” [3]

Lockheed Corporation Constellation model 049
The engineering team broke the model of traditional aircraft design with a plane that stood tall when compared to other aircraft, its height gave the unusually long props sufficient ground clearance. A tripletail provided additional stability and was placed high enough to clear the prop wash. From the tail, the fuselage sloped downward in a graceful curvature. The plane’s large propellers required long landing gears for safe clearance. To keep the forward gear from being too long.

Kelly Johnson gave the forward fuselage a slight downward curvature. For speed, the Lockheed engineers attached a pair of wings modeled after the twin-engine P-38 fighter.

Not only did it look good but it was technically a revolutionary plane. The LOCKHEED Constellation included the first hydraulically boosted power controls, aviation’s equivalent of power steering. At a max speed of 350 mph It was faster than most World War II fighters. Finally, it would feature a pressurized cabin for 44 passengers flying above 90 percent of weather disturbances. [4]

Hughes insisted that the first 35 planes were reserved for TWA which gave the airline exclusive use of the fastest, most comfortable transport available. To protect his investment He insisted on complete secrecy some of which bordered on the absurd such as park bench meetings, and strange code names i.e. ‘god’ for Hughes and ‘Jesus Christ’ for Frye.

If all went well Hughes and Frye held a winning hand, the ‘ secret weapon’ would be airborne by 1941 leaving the competition’s DC 3’s in Connie’s prop wash for two years, enough time for TWA to regain lost passengers. 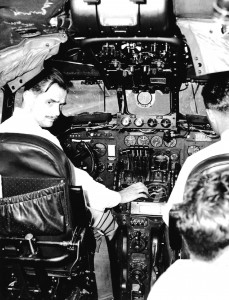 Hughes was not about to let his new plane slip into olive drab Army oblivion. The ‘Connie’ was no ordinary airplane and Hughes orchestrated a marketing stunt to show it off. He made plans with the Army to deliver one of their new Constellations from California to Washington D.C. leaving out a couple of key points not shared with the military, First came the rebranding, the olive drab Army colors were stripped off, replaced by the TWA logo and red and black markings. Next Hughes turned the routine delivery flight into a media event with a record-breaking cross country flight that pushed the new plane to the limit.

On the flight, Frye and Hughes split the captain’s duties exchanging pilot copilot seats halfway across the country. On April 17, 1944, Hughes landed in Washington, the time; a record-breaking six hours, 57 minutes, and 51 seconds. The flight made front-page news, with the New York Times calling it an outline of the ship of things to come in air transportation. Finally, before turning the keys over to the Army Air Corp, Hughes arranged VIP demo flights, much to the annoyance of Army brass. 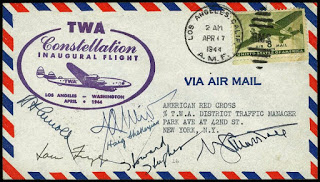 The Rest of The Story

• Renamed C -69 the Army inherited an airliner not quite ready for prime time. Engine problems and 486 different modifications curtailed production. At one point, the problems were so numerous that the Army directed that the plane not be flown outside the United States until they were convinced of their safety.

• 5004_1The war gave the competition time to catch up. The A new improved Douglas DC 4 was in the works, with a speed of 280 mph, a stretchered fuselage, and improved range; finally, a pressurized cabin completed the catch-up. An even better DC 6 was in the works.

• TWA took delivery of 10 Constellation in Late 1945 and immediately began stealing the show. Pouring on the power Jack Frye crossed the country at close to top speed reaching La Guardia friends and piloted a similar flight. Passengers loved the plane’s good looks as compared to the tube/pickle shape of a DC 4 and 6 or the blunt nose and chubby fuselage of the Boeing Stratocruiser. 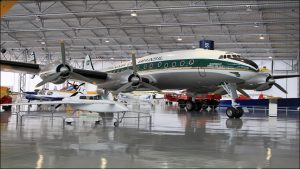 • TWA no longer had a route problem. The company picked up lucrative international routes. The ‘Constellation advantage ‘allowed TWA to displace Pan Am as the dominant carrier on the North Atlantic routes. Paris flights started in February 1946.13630 Fast for its day the Constellation took it 15 to 16 hours for those pioneering flights to Paris with refueling stops in Gander Newfoundland and Shannon Ireland. None of it deterred passengers who were willing to pay $711 for a round trip ticket ($9,240 in 2016 $) and with traffic jumping at 15 % a year TWA’s no longer had a route problem, it had a Hughes problem.

• Jack Frye had his share of problems including a pilot’s strike that nearly drove the airline to extinction, the temporary grounding of the Constellation fleet, a post-war recession and the startup cost of international routes. Hughes fired Frye in 1947.

• As for the Constellation, it and Lockheed thrived. The Constellation became the favorite of international airlines and the military. New super versions were introduced extending capacity, speed, and distance. The last Lockheed Constellation was delivered in 1959. Of the 856 built few remain airworthy today. 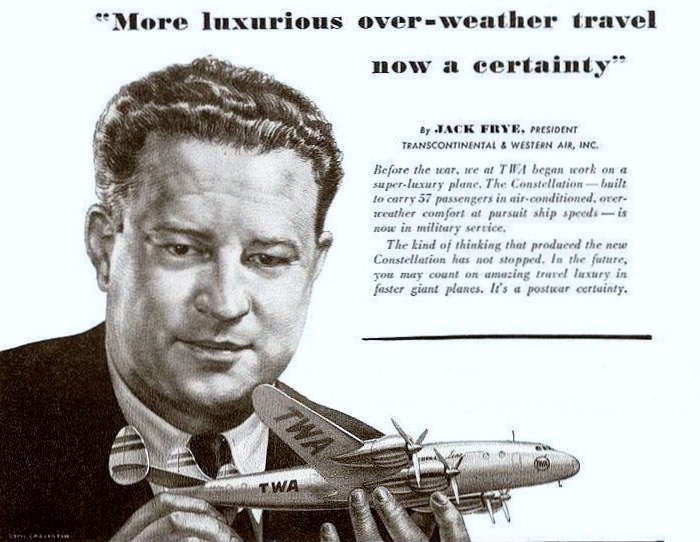 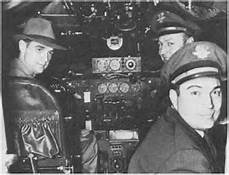 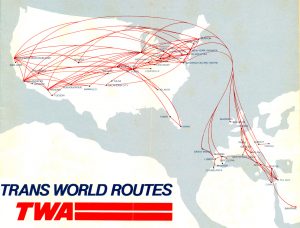 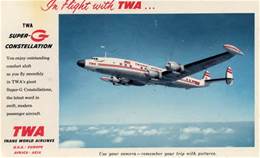 Over time, the Connie stature as one of the most graceful aircraft of all time intensified as evidenced by the number of Connie’s found in aviation museums from Kansas City to Brazil and Europe. A restored Constellation sits in front of the former TWA terminal (now a hotel) at JFK airport in New York. 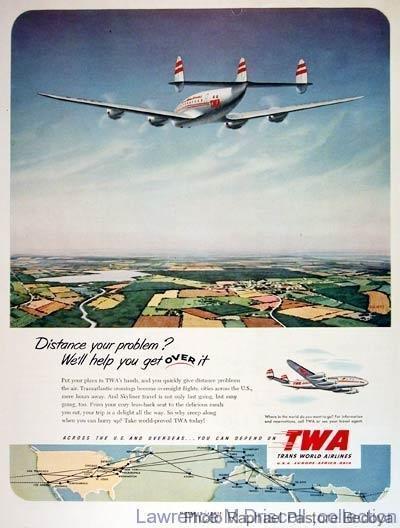 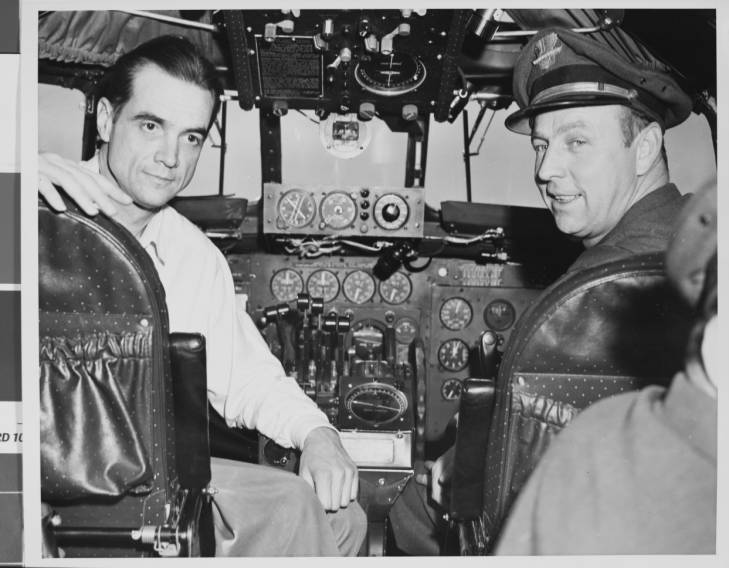 TWA served as an outlet for Hughes love of the air and Hollywood glamour. Captains at TWA flew in uniform, the owner in a loose shirt, fedora, and occasionally without shoes, a uniques Hughes style described as ‘eccentric panache’.

In this picture, Hughes is in the captain’s seat with Joseph Bartles as a copilot. The date is February 15, 1946, and the flight is the domestic inaugural in the Star of California between Los Angeles and New York. Onboard are Hughes’s friends; Cary Grant, Edward G Robinson, Walter Pidgeon, and 33 assorted movie stars. Howard made sure the press noted the 8 hour and 38 minutes flying time compared to the 14 hours required on a United or American Airlines DC 4. His publicity stunts helped propel TWA and the Constellation into a position of leadership. 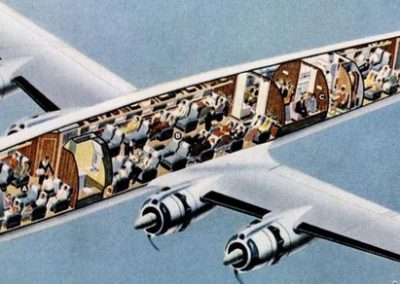 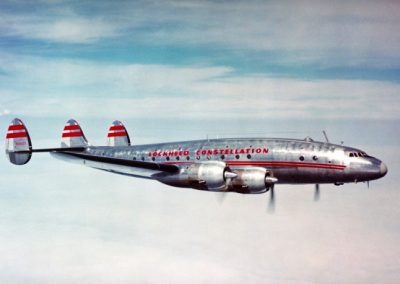 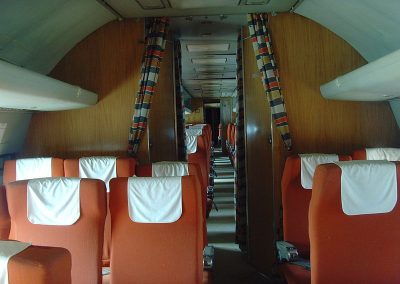 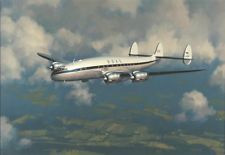 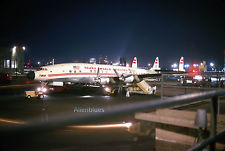 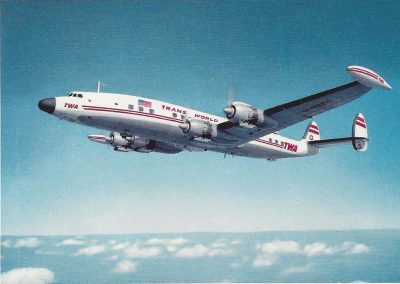 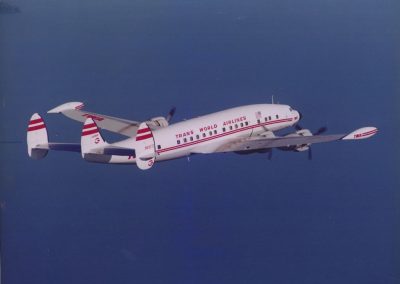 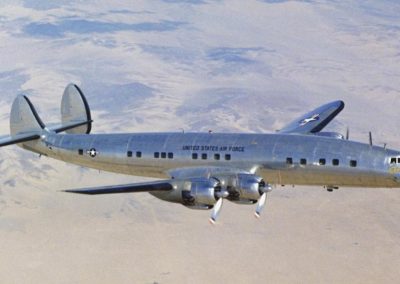 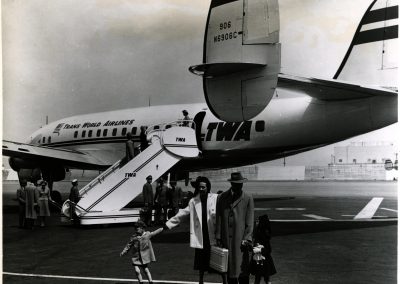 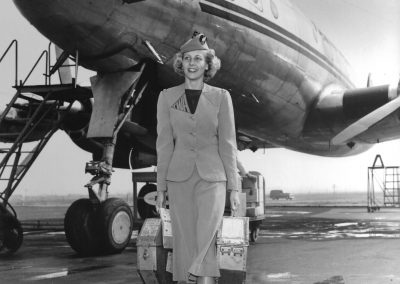 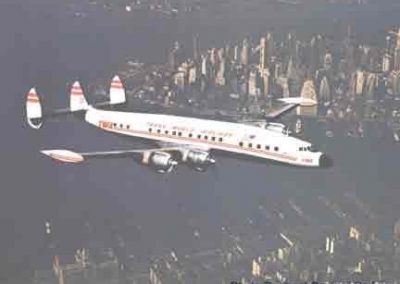 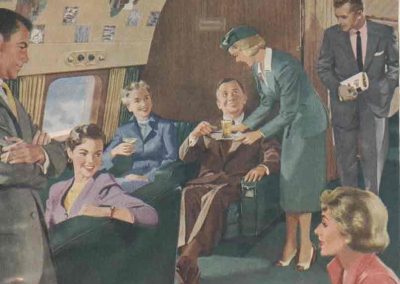