At the end of WWII Boeing needed a commercial plane that would compete with the Douglas DC 6 and Lockheed Constellation. Rather than design a new airliner, Boeing modified the C-97 Stratofreighter, a derivative of the B-29 Superfortress bomber. The end result was a jumbo luxury liner that cruised above the weather at 30,000 feet and covered 4,000 miles at 340 mph. Inside, the plane set the standard for first-class travel. Outside it was an ugly duckling in comparison to the graceful swan appearance of the Lockheed Constellation, or even the cigar-shaped DC 4 and 6.

What it lacked in looks was offset by comfort, roomy interiors, and luxury, The lower bar/lounge sat 14, the upper deck seating 55 passengers with 28 sleeper berths.  Pan Am flew the plane on premier services to Hawaii and across the Atlantic. BOAC describes its premier Monarch service to New York as a roomy flying hotel with luxurious dressing rooms, comfortable armchairs, sleeper births with breakfast in bed, and a spiral staircase leading down to the club-like atmosphere of a bar and lounge. BOAC Captain visits with passengers on a <monarch Stratocruiser flight

Back then the flying atmosphere on board was different, more relaxed. with more social interaction between passengers and crew. Captains and officers circulated about greeting and visiting with passengers. Captains occasionally left the flight deck door open, with only a velvet rope strung to keep the overly curious out. Others had a Captain’s table set up for dining with important passengers.

I remember it as all very nice but painfully slow with cabin vibrations making sleep difficult. The vibrations diminished and the excitement kicked up after we lost an engine westbound to New York. The dead prop was just outside our window in the forward compartment. After several checks by the flight engineer, the plane landed at Gander, Newfoundland. There passengers moved from airliner comfort and luxury to Army barrack simplicity. Eventually, a passing New York-bound flight was diverted to pick some of us up.

Spent the Gander New  York leg in the Bar – lounge of the diverted Strato flight. Glad to be out of Gander, but as a ten-year-old, the wonders of the lower lounge were lost on me. However not on James Bond or Ian Fleming who found the lower level appealing (see sidebar). – perhaps because. drinking a Martini at 30,000 feet in a flying bar lounge was a unique experience.

The Stratocruiser’s luxury or atmosphere.was never duplicated in the early jets. Bond’s creator, Ian Fleming, a regular Stratocruiser passenger, preferred its slow stately luxury to the needless haste of jet travel. It was Fleming’s airliner of choice for Agent 007. In Diamonds are Forever  Bond smuggles diamonds to New York on a BOAC Boeing Stratocruiser flight from London. In For Your eyes only Bond is jet bound on a Comet to Montreal and laments the passing of the Stratocruiser. Back in the 1950s, it took 16 1/2 hours from London to new York with a refueling stop in Shannon Ireland. On the lumbering jumbo here was time for the cocktail hour, peaceful dinners, seven hours of sleep in a comfortable bunk, and wandering down to the lower deck for a dawn ‘Country House Breakfast’. On the Comet or Boeing 707 speed replaced that feeling of suspended time and space.  No more visits from the captain now absorbed in cockpit duties of a fast jet flight.[Read about James Bond’s Stratocruiser flights in ‘POST’ or click the link to the right.]

Mechanically temperamental, the cantankerous engines were high maintenance and the aircraft was a flop with commercial airlines with only 56 sold. Of those 56, 10 were lost in flight taking with them 135 lives. Luckily for Boeing the Stratocruiser was a hit with the military (the Air Force purchased nine hundred).

Today, as I sit squeezed into a narrow seat with no legroom, I think back to the wide seats and comfort of the luxury compartment on the old Strato. Compared to today’s jets  It may have been slow, but what a way to go!

Jeffrey Renshaw flies across the pond on a BOAC Stratocruisers first-class “Monarch” service between New York and London.

As a young man during the early ’50s, I was fortunate to have traveled many times on those magnificent airliners of the day – The Boeing Stratocruiser, Lockheed Constellation, Douglas DC-7C, and Bristol Britannia – flying between New York and London. My father had retired from flying after the war and was in management with BOAC stationed in the US at LaGuardia first, then Idyllwild (Kennedy).
The early BOAC Stratocruisers (called the “Monarch”) and Contellations were all gleaming aluminum, reflecting the ramp lights while waiting to board their passengers. No walkways back then, just a short journey from the terminal to the steps up to the aircraft. Sometimes, if the weather was foul, the ground crew would escort passengers to the aircraft shielding them with umbrellas – what service!! . Usually the engines on the starboard side of the aircraft (right or opposite side from entry doors) would already be running. Inside, these “giants of the sky” were roomy and comfortable. The bathrooms were large with private toilet areas, double sinks, wall-length mirrors where I can recall men shaving in the early hours before arrival. During these long flights, berths were provided for those passengers who desired them and my sisters and I spent many a night in between those crisp white sheets peering out the small “porthole” window at the stars or the moon. Sometimes, as I recall, the flight to London from New York lasted 15 hours going via Gander, Newfoundland; Shannon, Ireland; Prestwick, Scotland then on to London. Many times a stop at Manchester would be in the itinerary.
Dining on these flights was equal to that in some of the finest restaurants, even in the “Tourist” class. Stewards (there were few stewardesses in the early years) dressed in white dinner jackets would serve appetizers from silver trays onto real china using real silverware and glass. There was a choice of entree and dessert as well as a full complimentary “bar” service. Smoking was the norm and the Stratocruiser had a lounge down a central circular stairway where one could sit and “chat” with an after-dinner drink and a smoke. A few hours before arrival time as the dawn approached, the head steward would come by and offer a “spot of tea” prior to a breakfast of “bangers”, eggs, bacon & toast.
On some occasions, because of my father’s status with BOAC, I spent many hours of the journey on the flight deck (cockpit) in awe of all the lighted dials and switches. I would listen intently

as the Captain explained the workings of each and every instrument, dial, switch and lever. While wearing a set of headphones, I could hear the Captain talk to the ground controllers and watch him maneuver the large steering column, throttles and rudder pedals while getting permission to change course or altitude. This was my most exciting part of the trip and if allowed I would spend the whole time there. Even back in my window seat I would always be glued to the window watching for a movement of the control surfaces out on the straight wing. At night, the engine exhaust would appear as a blue flame from the sides of each of the four droning engines while moonlight or navigation lights glistened off the propellers.
I can clearly recall landing at the crack of dawn at Shannon or Prestwick and seeing rabbits by the runway as we gracefully touched down and roiled to the terminal where we disembarked for a short time, having a snack and tea in the lounge while the aircraft was refueled for the rest of our journey. During the descent stage, the steward would come around with a tray of “sweets”, hard candies which one would suck on to ease the inner ear pressure.
Arriving at London, the passengers disembarked onto busses with comfortable, high back seats for the short ride to customs. BOAC also provided busses to their main “Airways Terminal “in central London. This certainly was the “Golden Age” of civil aviation!
October 4, 1958, ushered in the jet age when the BOAC Comet 4 made the first scheduled transatlantic journey with a full complement of passengers. BOAC had operated the first commercial jetliner service, the ill-fated Comet 1, in 1952 but discontinued service after several crashes due to airframe failure. None of our family ever flew on the Comet 1 since it operated mainly on the far eastern routes. I flew on the Comet 4 many times, as well as the 707 and VC-10. These early jets hold a very special place in my heart but none as close as those slow, graceful prop liners. Plenty of room in the cockpit for a pilot,co-pilot, flight engineer,navigator, radio operator.
Image source BOAC 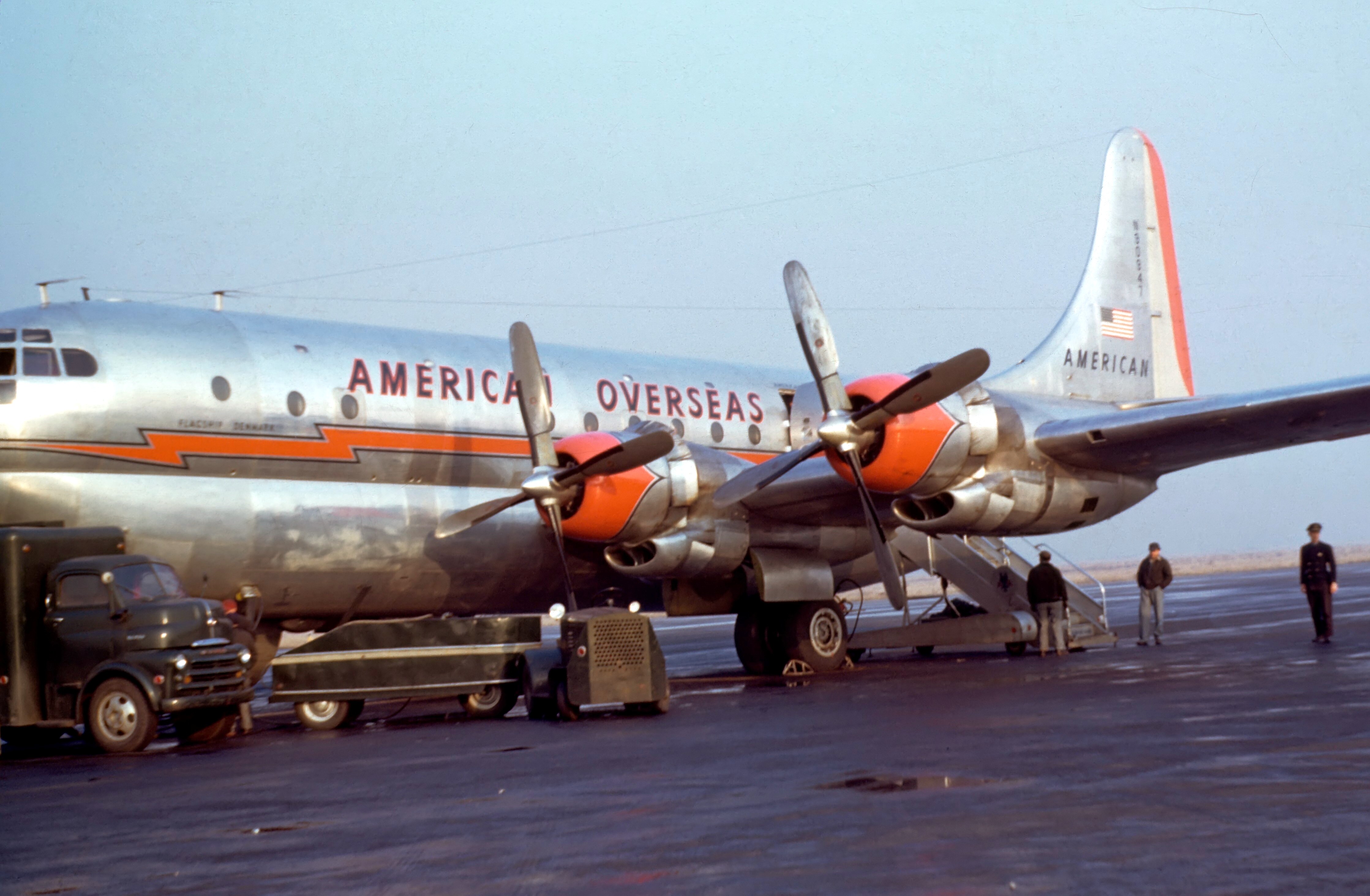 A Boeing 377 Stratocruiser four-engined piston airliner registered in the United States as N90947 and operated by American Overseas Airlines with the name “Flagship Denmark”, delivered to the airline in November 1949 which merged with Pan American World Airways in September 1950. “Photo by Chalmers Butterfield”.

WHAT DO YOU REMEMBER? (SEE COMMENTS BELOW)