The Story Of The Australis 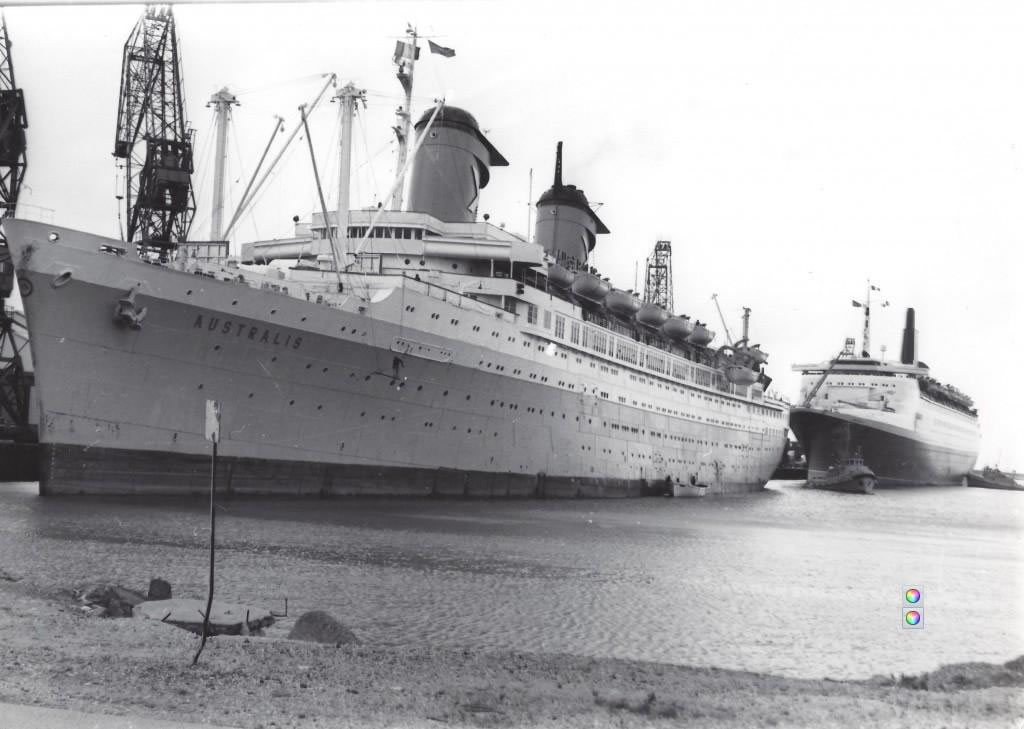 ” There were many modern ships on the seas but none did it better. It wasn’t always the quality of the cabin or the carpet that counted. I visited other famous ships such as the France and the QE 2, none had the magic of the America/Australis. She may not have been as attractive, but to me, the attraction was her interiors, as the S.S. America and the knowledge that she was a friendly, safe, and extremely comfortable ship”.

Scroll down for more passenger comments

The early 1960s hit American shipping companies particularly hard. Passengers were deserting ocean liner travel, preferring the speed of jet aircraft. On the other hand, the Greeks were buying. Anthony Chandris, the chairman of Chandris Lines, needed ships to fill the company’s ambitious plan to expand cruise service in the Mediterranean and the growing immigrant service to Australia and New Zealand. When US Lines president John Franklin president listed the America for sale, Chandris moved quickly and dispatched the company’s technical director over to New York for inspection. The ship passed with flying colors, a final price tag of $4,250,000 cemented the deal. On November 15, 1964, the ex America now Australis sailed for the Chandris Ambelaki in Greece shipyard for refitting as a one-class ship.

At the shipyard, significant changes for the new route included a more than double passenger capacity from 1,048 passengers to 2,844, the addition of complete air conditioning, 350 new cabins, and the installation of an outdoor swimming pool and bar on the aft end of the Promenade deck.

On August 21, 1965, the Australis made her maiden voyage as a one-class ocean liner with a capacity of 2,258 passengers. For the next thirteen years, she made around the world voyages starting in Southampton, carrying immigrant families to Australia and returning to her home port via the Panama Canal with tourists and passengers from down under.

What is notable from reading passengers and crew comments is the friendly atmosphere aboard helped ease the stress. Passengers boarded, expecting a no-frills austere voyage. They were pleasantly surprised by the splendor of the ship’s interiors and the warm, friendly atmosphere. Comments such as “The memories of the Australis will never leave me as I had some wonderful times aboard,” or it was the cheapest and best trip of my life.” Reflect on the good feelings that former passengers have towards the Australis.

The friendly atmosphere started at the top as described by Australis first captain Demitrios Challioris. “Being captain of such an enormous cruise liner was a very demanding job. Every morning you would have to go out on the deck, greet passengers, kiss their foreheads, listen to their wishes and complaints. Very often I was with my wife, so I would easily approach a pretty woman and talk to her, pay her a compliment and she would say, “Captain, would you please invite me to your table tonight?” Madame consider yourself invited”.

On board the food was good, the ouzo flowed, and the good times rolled. “There was a definite feeling that the ship was a no-mans land, and whatever they did on board would not be counted in the old world or the new life.” According to playroom hostess Margaret Volovinis. “This led parents to leave their children in the playroom for hours or to wander the ship at will. The young (and not so young!) men and women were falling into passionate romances with other passengers (only too willing!) crew members and a general air of true gay abandon! I never met passengers that had such an effect on me. People going on a two-week holiday cruise in the sun weren’t in the same category.”

From 1964 to 1977, the Australis made the sixty-day voyages around voyages with occasional cruises out of Southampton. Starting in the Mid 1970s, she was showing signs of growing old and tired. By then, she was approaching her fortieth birthday, had traveled 4,971,0061 miles carrying 1,301,482 passengers. Passengers boarding the Australis began noticing sins of her age. “The old girl is not what she used to be, “according to frequent passenger Steve Mullis who sailed from Southampton in 1976. Problems such as loss of power, mechanical breakdowns, small electrical fires became more frequent. The performance problems combined with a shift of travelers to jet power aircraft led Chandris to put the ship up for sale. A final trip to the scrapers seemed inevitable.
PS. GO BACK TO THE S.S. AMERICA PAGE TO GET THE REST OF THE STORY. 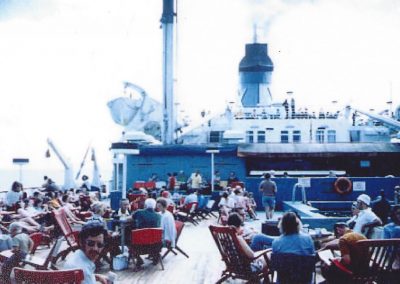 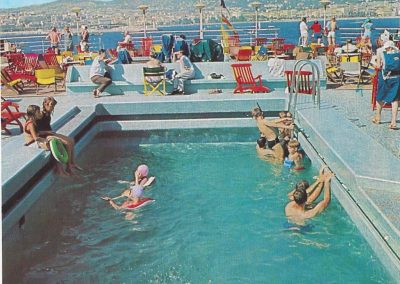 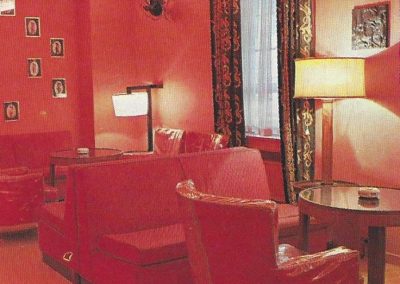 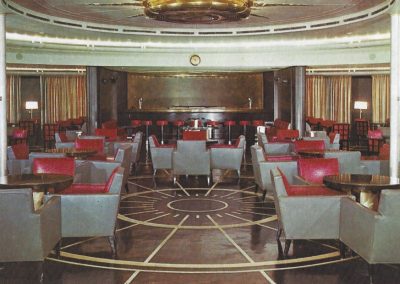 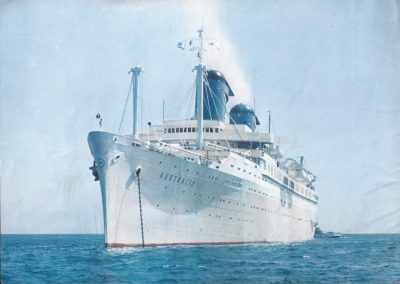 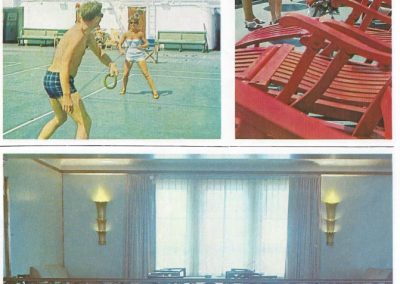 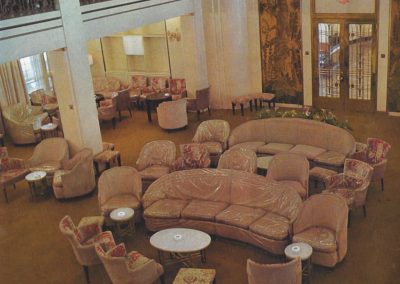 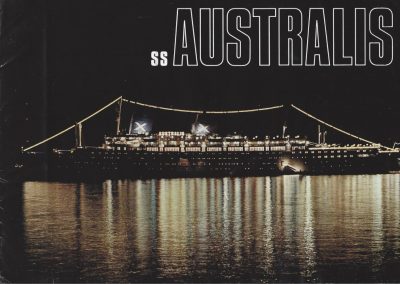 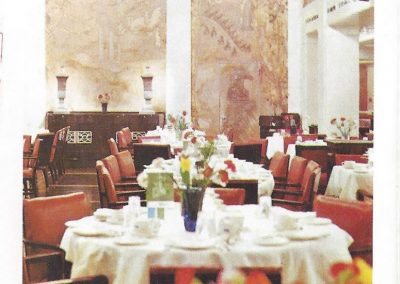 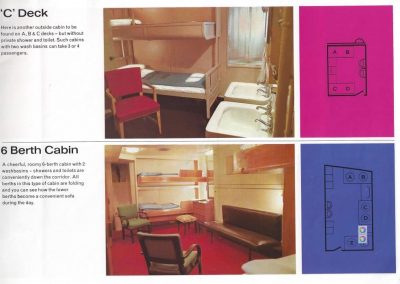 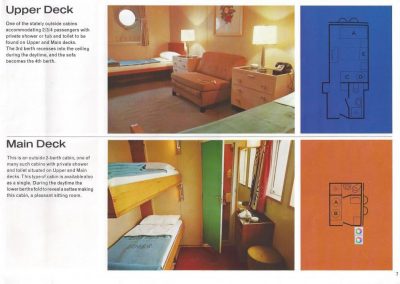 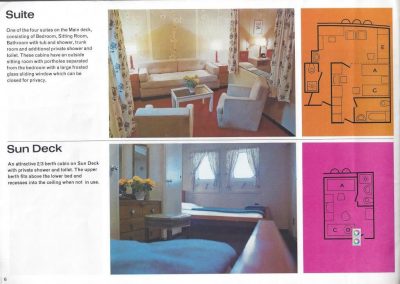 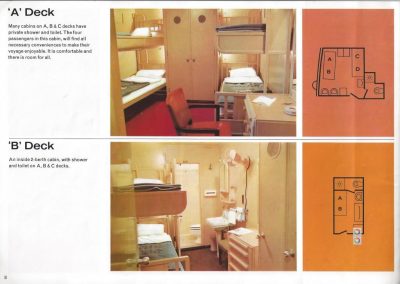 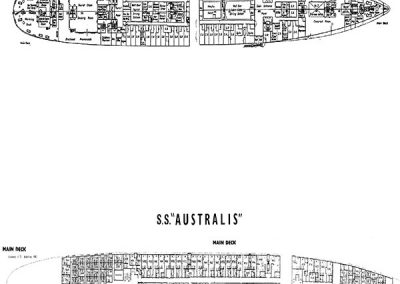 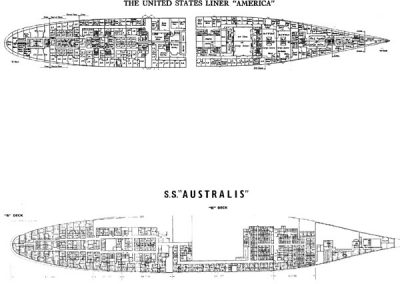 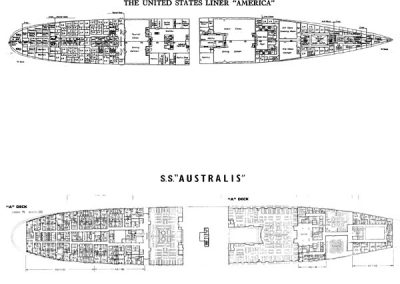 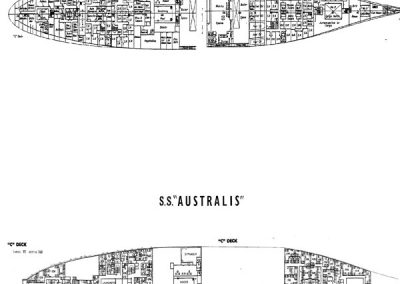 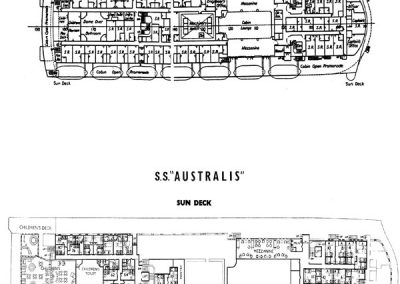 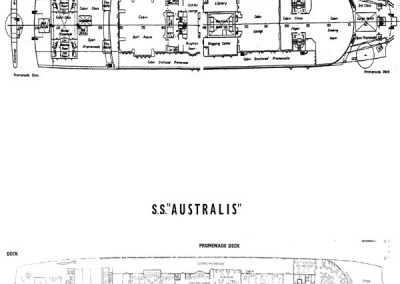 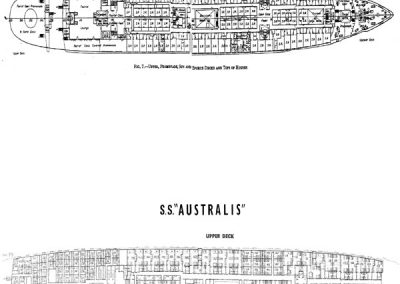 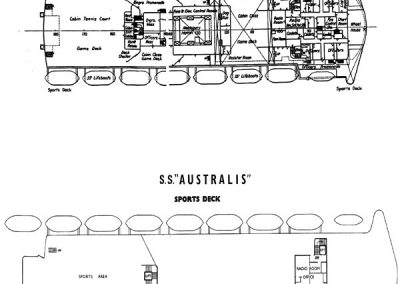